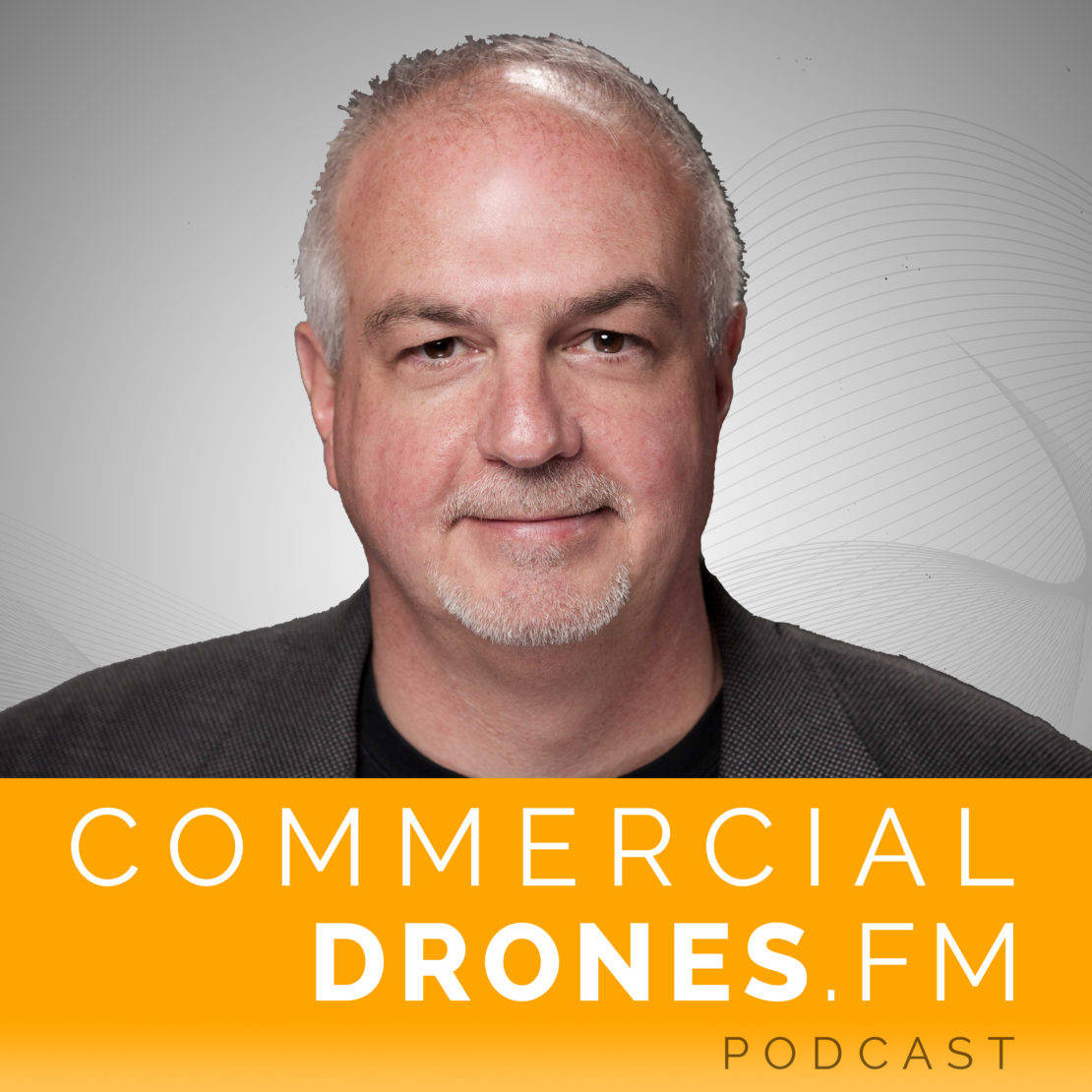 Host Ian Smith discussed a wide range of topics with Colin, aka the Drone Analyst, during the episode, which included exploring some of the biggest misconceptions, myths and opportunities that currently exist in the market, as well as a look into the future. I was able to connect with Ian to run through a few questions I had for him after listening to the episode which center on how the technology is being utilized on the farm, whether he’s in agreement with Colin around what standards will mean for organizations moving forward and plenty more.

The podcast is embedded in the player above, but you can also listen to the episode on iTunes or Google Play.

Jeremiah Karpowicz: Hearing Colin talk about his professional experience got me thinking about the many different backgrounds of people in the drone industry. In the conversations you’ve had with your guests, have you noticed any commonalities in those backgrounds, or are they all over the place?

Ian Smith: It’s always interesting to discover what led people to careers in the drone industry. Whether it was a previous position that had something to do with similar technology, or if it just stemmed from something else—something more primal that had been with them since they were younger. The desire to take flight is strong and the barrier to entry has previously been quite high. Now, nearly anyone can become an FAA-certified pilot by just taking a $150 written test. Regardless of that, there does seem to be a commonality in that folks who work for OEMs and software companies tend to have had some experience in aerospace or the technology sector.

You guys had a pretty in-depth conversation around why agriculture is not the most lucrative market for drones, which is something Colin has written about extensively. Do you think some of the challenges he mentioned are exclusive to the ag space, or will they pop up in other industries?

Good catch. Agriculture can be lucrative but has been the epicenter of drone hype for years now. The earliest of adopters in agriculture started to get on-demand aerial views of their assets via drone as early as 7 years ago. Agriculture is one of those industries where so many factors come into play for the final product—the weather, the soil type, field history, seed type, row spacing, time of planting, time of harvest, sunlight, moisture, etc. The question has always been, “Great. I have an NDVI map of my field. Now what?” Companies are trying to make drones more effective by developing software that can make the data they provide more useful and give the grower something to actually do; a deliverable that lists the actions to take to increase the yields or decrease the inputs. Drones are just a single piece of the puzzle and they may never have had a fighting chance to live up to the hype that many placed upon them. There is a lot going on in agriculture, there just needs to be more development in the software to make them a no-brainer. If you look at construction, for example, there are quite a few less variables, so drones became immediately useful by providing data that none of the companies had ever seen before. Elevation models, 3d models, volumetrics, point clouds, video, and orthophotos are changing the way construction companies conduct their operations by giving them the power to increase efficiency, safety, and save money from this aerial imagery. The size of construction sites are also perfectly within the endurance capabilities of most small drones so that’s another thing they have going for them. With that said, other industries will absolutely experience these challenges but have the virtue of not having been under such an intense spotlight of expectation.

Colin mentioned that he’s never seen an industry with so much aggressive speculation around growth, and that he’s currently tracking over 50 projections concerning the value of the technology. What do you think are some of the factors that have contributed to so such a major hype cycle?

To quote Mugatu, “That drone industry’s so hot right now.” I believe one reason for the hype is that flying robots are intrinsically cool—if they can be used for business, even better. But really, it’s seriously odd on how wild the speculation is, the rate at which it’s coming, and the variation of the projections. Colin laid down some excellent points on how these industry reports work so if you want to understand why major investment firms and analysts are quoting a $120+ billion market potential, you should definitely give the episode a listen. I have been contacted a few times to participate in some industry reports and the actual methods in which they get their data was a bit alarming. On contributing to one report, I was asked to guess how much the thermal imaging market would be worth in 5, 10, and 15 years… how could I possibly come up with a reliable metric? I wound up doing some rudimentary math and assumed that sales would moderately increase and hardware prices would moderately decrease. My final result was incredibly conservative and probably pretty boring. I’m not sure if they wound up using my projection – the report would’ve cost me hundreds of dollars just to read.

Do you agree that “companies who don’t think there will be standards are dead“?

I’m mostly in agreement. Any company worth its salt will easily identify that there are rules and regulations in which to play by when fostering commercial drone operations. I spent many years in commercial/business aviation and mountainous efforts were made towards compliance. Just take a look at a printed copy of a FAR/AIM and you’ll get anxiety just imagining what’s written inside. The FAA can audit a company if they want and go through flight operations records. What if you have no records? Your operational certificates can be revoked and you can lose permission to operate aircraft indefinitely. Drone industry standards are directly influenced by existing manned aviation—the FAA rules the skies and the main concern is safety. If you don’t want to comply, you’ll never see the potential ROI because you’ll have growth anxiety. All it takes is one incident. Something that’s really interesting to me is seeing legacy manned aviation standards companies like Wyvern, a flight operations auditor, coming into the drone space. Wyvern announced their EXACT Assessment Program at AUVSI, which is a certification process for drone operators who want to uphold rigorous safety standards and adhere to industry best practices. In manned aviation, charter companies and flight departments will wear their Wyvern certifications like badges of honor, showing how important the culture of safety is to their operation and how pervasive it has become. There is something to be said about that.

When it comes to the future, Colin talked about and has tweeted about how we might need to reconsider when that future is going to arrive, since the creation of something like a UTM is going to require major business and regulatory questions get sorted out. What sort of people/organizations/companies do you think will emerge or take charge to help find those answers?

NASA’s UTM effort seems to get a lot of attention. They’re trying to create the answer to a very difficult challenge—a future in which there are thousands of drones and hundreds of manned aircraft operating together in a given area. The FAA has made powerful strides to bring us closer to that reality, which I applaud them for. As far as the companies that are involved, there are quite a few which are trying to play a major role. You’ve got business lobbying organizations like the Small UAV Coalition, regulatory-focused companies like Skyward, and other small/medium businesses which all play a role in making their voices heard to help find these answers. Part 107 so far has been a resounding success but as drone operations grow and regulatory concerns like beyond visual line of sight operations become more and more requested by operators, a scalable system needs to emerge. Whether it comes from the private or public sector shouldn’t matter much. I’m hoping that UTM succeeds and comes sooner than later.

Full Episode Transcript
#025 – Analyzing the Growing Drone Industry with Colin Snow [00:00:00] [Advertisement]: This episode is brought to you by UpSonder, the easiest way to monetize your drone with the industry’s only Million Dollar protection coverage free to its members UpSonder is the top choice among certified drone pilots to get up and stay up to get started. Create your free listing today at upsondor.com. [00:00:23] [Introduction] Welcome to Commercial Drones.FM, the podcast that explores the commercial drone industry the people who power it and the concepts that drive it. I’m your host Ian Smith.

[00:00:35] IAN SMITH: Hey everyone welcome to Commercial Drones.Fm. Today I’m sitting with Colin Snow, the drone analyst who’s the CEO and founder of Skylogic Research. We are at the UAV, Commercial UAV Expo in Las Vegas, Nevada. Colin is one of my most anticipated guest whenever I was starting the podcast, so he always has great insights so I’m really happy to welcome him to the show. Welcome to the show Colin.

IAN: [00:42:58] IAN: I could go on a rant about that I think it was Chris Anderson who is like tweeting about how drones are not aviation. And I was very worried about that as soon as you ascent a millimeter above the ground outside you’re in the federal you’re in the national airspace so. I don’t agree with that. But yeah it’s it’s aviation and you get a pilot certificate for being 107 certified. So you literally are called a unmanned aircraft right then and you are the pilot in control.