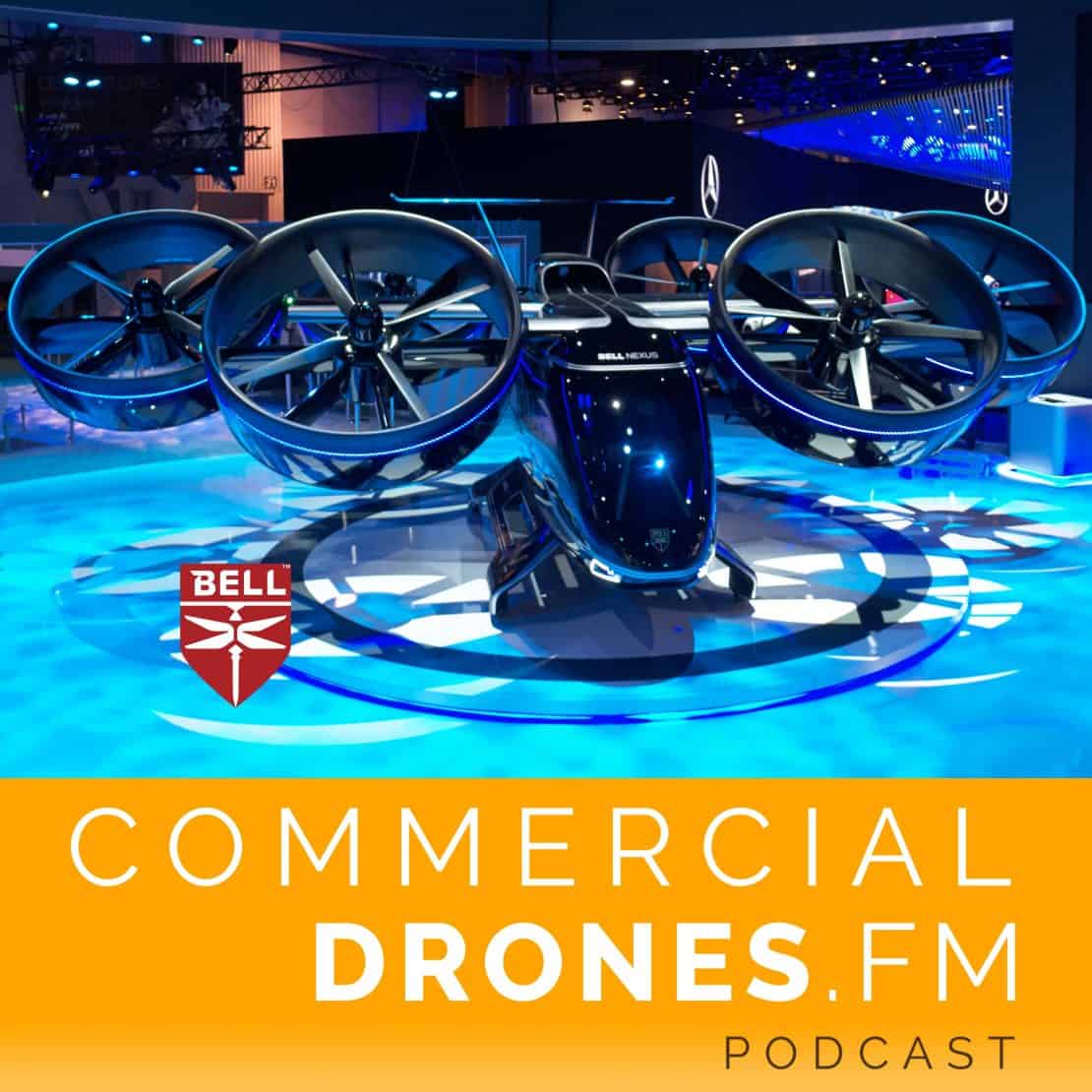 How much is your time worth? What if you could shave off minutes, maybe even an hour, every single day from each side of your commute? You could spend your time with family, friends, even being more productive at work. So what is the actual value of your time?

It’s pretty difficult to put an exact number on the cost of each second but this is the question that Bell Helicopter wants us to start asking ourselves.

Alright, yes, that’s pretty vague. So what are we talking about here? Well, the future of aviation for one.

I’m at CES 2019 in Las Vegas and stopped by the Bell booth for some Q&A on their newest eVTOL aircraft called, Nexus. Bell is part of Textron, a publically traded company, and is one of the largest aircraft manufacturers on the planet.

That’s Bell’s Scott Drennan – he’s been giving a presentation at the Bell booth, focused on Nexus. Nexus could be described as many things – flying car, air taxi, passenger drone, or if you’re being technically correct – an eVTOL aircraft.

What used to always be computer-generated concept imagery of these contraptions when I’d see pictures of them on the internet, had suddenly transformed into the real thing. Right in front of me at the Bell booth at CES, stood Nexus, a vehicle that could very likely be the precursor to the future of aviation.

Anyone interested in aviation, the future of it, or the future, in general, will also be interested in the specs of this thing. Let’s get into the nitty-gritty here for a moment while I describe this vehicle to you…

Nexus is a hulking, shiny, black, eVTOL hexacopter aircraft with ducted fan propulsion and a 4+1 internal configuration. Meaning it has the capability to carry 4-passengers and 1 pilot up front at the controls in the cockpit. It has a gross payload weight capacity of 600 lbs. Let’s assume that payload is humans because the interior looks very much like a high-end automobile – not that of a traditional helicopter. I mean, it even has cupholders. And backing up for a second on some terminology.

The term “eVTOL” literally translates into “electric, vertical takeoff and landing” – emphasis here on the “e” which is the designator for, “electric.”

So what’s interesting is that this isn’t planned to be a fully electric aircraft to start. Nexus will initially be a gas/electric hybrid.

It has a mechanical, thermal turboshaft which drives a generator that produces high voltage electricity which is then distributed out to the electric motors in each of the six motor hubs.

Bell chose this hybrid-electric propulsion system, rather than going full-blown electric, so Nexus can fly further and carry more weight. The plan is to eventually get to full-electric once technology allows.

Also of note is the presence of said pilot. There will initially be a real, live human pilot at the controls. This is due to regulations, safety, and probably to put the very first passengers much more at ease when hopping in. The fuselage of Nexus is made of graphite-epoxy composite.

Bell’s design of this aircraft is striking. It’s sleek, futuristic, and has thin strips of blue LEDs, evoking images of TRON.

Bell, besides being one of the world’s largest helicopter manufacturers, is uniquely qualified to build something like Nexus. They’re the makers of the V-22 Osprey, a military transport aircraft that’s also VTOL, which went through extensive development in the 80s and 90s.

The V-22 wasn’t without its own challenges however, a series of fatal crashes over the years lead to tumultuous times for the project but it’s still in service today. No doubt Bell will apply many of those learnings to the design of Nexus. This does underscore, though how safety is one of the hottest topics for our flying taxi future.

Because this – and other eVTOL aircraft – will be so heavy and due to the smaller size of their rotor blades, it’s unlikely that Nexus and others can autorotate in the event of an engine failure.

Autorotation is an aerodynamic phenomenon that your standard, run of the mill helicopters use as a safety mechanism in the event of engine failure.

So on eVTOL platforms there usually are multiple motors for redundancy, but a key differentiator with this type of aircraft vs. more of the standard single-rotor helicopter is that in case of an engine failure, the typical helicopter, due its design and size of its rotor disc, can actually glide along and land safely, in a controlled manner, by using the inertial energy that is stored in the main rotor from when the engine was powering it.

Most e-VTOL aircraft designs do not accommodate autorotation. So, I imagine that:

A) this aircraft will never crash due to motor failure

B) there will be some type of system – perhaps a parachute – that will help save lives in this unfortunate scenario.

So now the fun part – imaging myself taking this puppy for a spin – as a passenger, of course.

I live in San Francisco and one of the big commutes that happen for business around these parts is from San Jose in the south up to San Francisco to the north. It’s a 48 mile one-way trek on land.

Doing this commute by car at 08:30am on a Tuesday can take up to 2 hours. In public transit on the train, it’s nearly the same.

By air, as the crow flies, the route is admittedly a bit shorter – 42 miles, straight over the bay – but I’m willing to bet that by air, it’s significantly, significantly faster that we won’t care in the end at all.

So by my calculations, that same distance and commute that would take me 2 hours in a car could take me just 17 minutes in Nexus. Compared to the 120 minutes from before, that’s a savings of 103 minutes – more than an hour and a half. I’d shave off 85% of my commute time. There and back in Nexus would only be ~40 minutes of total commute time.

Let me put it this way – I could take Nexus on 3 round trips between the two cities before I even complete ONE leg of my journey normally during rush hour. W.T.F. Why haven’t we been doing this already?

It reminds me of a legendary aviation pioneer by the name of Frank Robinson, who started Robinson helicopters – the machines I used to fly.

Frank’s dream was to give the world an affordable helicopter that people could use as their own form of transportation. He did a pretty good job but unfortunately, the things are still a quarter of a million bucks brand new, way too noisy, and just not practical for that purpose at all.

This new wave of quieter, efficient, and hopefully cost-effective aircraft can change the way we move around urban landscapes drastically.

Ok. So when can we start flying around in futuristic taxis like Nexus? The answer to that, after the break…

No matter what, I needed to ask this question and I knew Scott would of course already have meticulously prepped answers from his PR team anyways, but hearing it from him and imaging when we’ll see these things buzzing around overhead was irresistible. When can we actually get into this thing and fly?

Repeatedly, throughout Scott’s presentation and while we chatted, he would name drop many of the large number of partners that work on Nexus to make it a reality. I was curious if this was normal or if it was special, due to the uniqueness of this project.

But, to me, the most thought-provoking partner of them all is, Uber. As you may know, Uber has been speaking about their own Elevate initiative for a couple of years now and have even had 2 conferences about it – one most recently in L.A. and the first in Dallas, just a stone’s throw from Bell Helicopter’s HQ in Fort Worth.

Uber’s core product is moving people around but are expanding into food and other avenues as well. They’re laser-focused on innovating in mobility.

Uber describes Elevate as, “the future of urban mobility.” They’re likely to look at starting early in the sky with drone deliveries through Uber Eats, where they participate in the UASIPP.

Uber Elevate has very much been the vocal proponent of placing eVTOL technology in our lives and their initiative also encompasses a litany of partners – Bell among them – to develop the aircraft, components, batteries, concepts, and systems that will make these dreams a reality.

In order to hit the 2025 goal, there are no shortage of challenges to overcome. My observations from the drone industry are that even though regulatory hurdles may seem insurmountable, the technical side has always outpaced the bureaucratic shortcomings.

If you couldn’t already tell – I am extremely excited about this technology. For me, personally, it is at the intersection of two of my most beloved passions – drones and manned aviation – moving people and things around efficiently and at scale.

Drones are absolutely paving the way for the network of flying cars and air taxis that we’ll soon have. The disruptive technology planted a proverbial stake in the ground for regulators and the world’s population of what is possible. eVTOL aircraft like Nexus are just big drones with seats in them.

In any scenario I play out in my head, there is literally no possible way that autonomous, electric aviation won’t happen – the pieces are all there, it’s just a matter of when.

Look forward to more podcast episodes about urban aviation, eVTOL, and air taxis as time crawls on. It was a pleasure having you here.