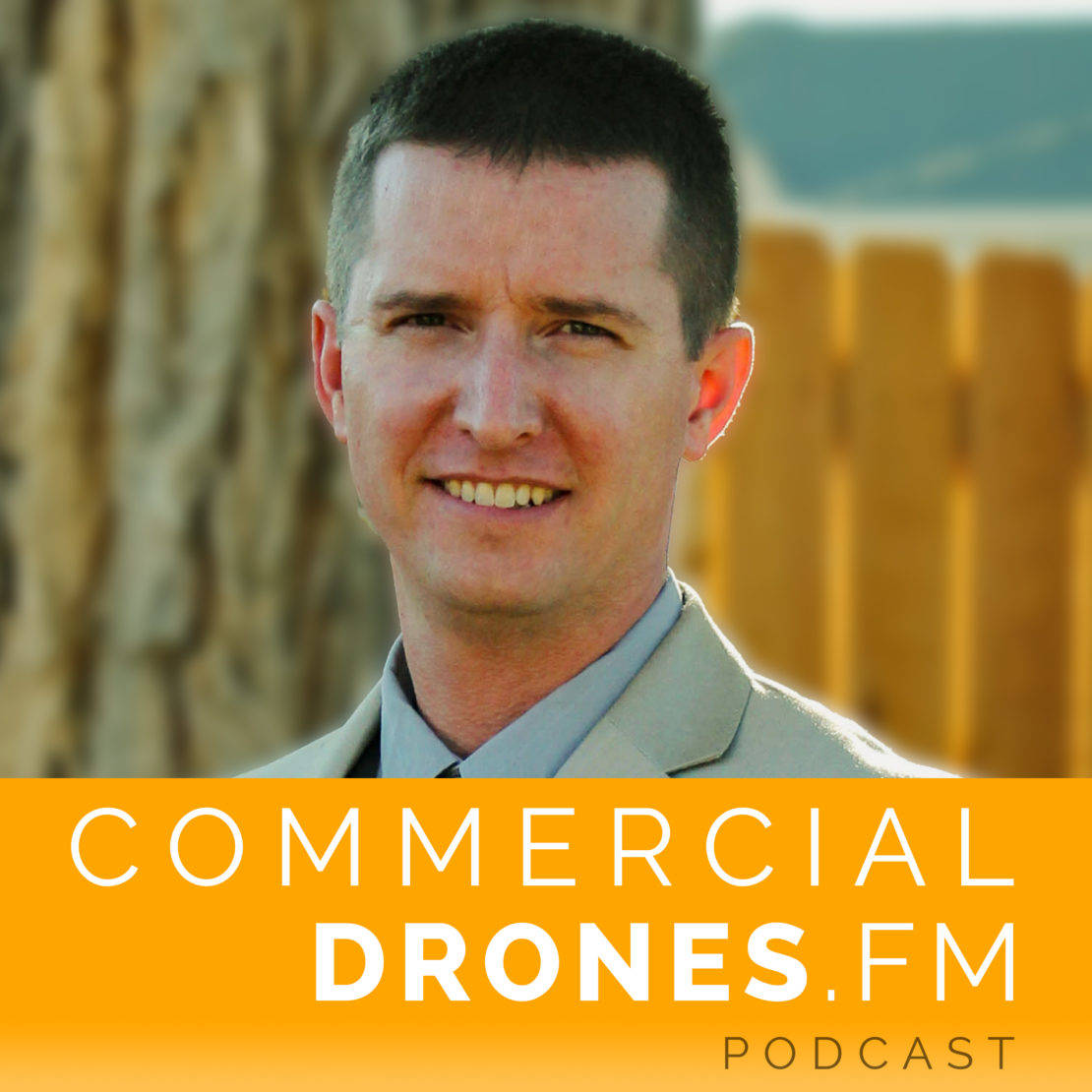 Topographic data is some of the most sought after information that can be generated by drones. To ultimately derive this data, terrain contours, point clouds, and digital surface models are created using software like Pix4D and Autodesk Civil 3D. Mark Blacklin is Data Integration and CAD Supervisor at CGRS, a Colorado-based construction, engineering, and compliance service company that serves the petroleum industry. Mark and Ian discuss the complexities of high precision drone missions, drone hardware and software, GPS systems used (RTK, check points), tips for setting ground control points, and what types of deliverables high-end clients expect.

Mark Blacklin is Data Integration and CAD Supervisor at CGRS, a Colorado-based construction, engineering, and compliance service company that serves the petroleum industry. The company has been providing environmental compliance management for fuel system owners and operators for more than 25 years, and as you might imagine, drones have changed a number of things around how they approach such tasks. Mark has been involved in determining how those changes can and should be approached.

On episode #29 of the Commercial Drones FM podcast – How To Conduct High Precision Drone Surveys: What To Use and Tips On Improving with Mark Blacklin – host Ian Smith sat down with Mark to discuss specific details associated with some of things he does at CGRS, which range from logistics to client management. I was able to catch up with Ian to further detail a few topics from the episode including why a multi-rotor can be more beneficial than a fixed wing drone even when there’s a large amount of area to over, what kind of confusion can arise when discussing precision vs. accuracy and much more.

Jeremiah Karpowicz: You mentioned that when you were first starting the podcast you were looking to secure Mark as your very first guest. What made him the ideal person to kick off your show?

Ian Smith: Mark is an extremely knowledgeable professional and takes a pragmatic approach to his commercial drone operations. His extensive experience in CAD software, photogrammetry, and surveying has translated to drones seamlessly. He is an active drone industry community member and was someone that I’ve always respected. Any time I’ve had a question or needed an opinion on the way to conduct an operation, what equipment to use, software, processing techniques—whatever—he always had great and thoughtful feedback. The podcast is all about information; specifically, transferring information to the audience. This is what made Mark an ideal first guest for the podcast and I’m so glad to have finally had him on the show at the Commercial UAV Expo.

It was interesting to hear you two talk about why a multi-rotor can be a better fit for a project than a fixed wing drone, even if that means multiple take offs and landings. Will the true cost benefit of fixed-wing only be able to be achieved with BVLOS operations?

Good catch. First of all, we need to be honest with ourselves—people and businesses are routinely conducting BVLOS operations with their drones—fixed-wing and multirotor alike—whether we or the FAA like it or not. It’s shockingly easy to get a drone into a position where you cannot see it with your own two, unaided eyes. For those who do operate fixed-wing drones, I am willing to bet that whether by accident or by design, they get into BVLOS conditions fairly often and shrug it off. It’s something that’s tough to avoid. I’m not saying that people are flying many multiple kilometers away from their position on the ground, but by the true definition of the term, even if your aircraft is behind a building briefly, you’re operating BVLOS. With that out of the way, from experience, I know that fixed-wing drones can be a terrible pain to work with. You have to find a takeoff zone, a suitable landing zone, respect the wind, and have a lot more operational consideration than just taking off vertically with a rotary aircraft. In many cases you also have to transport and assemble a full ground control station and even a physical, catapult launcher. By virtue of that extra workload, the payoff of increased endurance does not typically pay dividends unless your operation is over extremely large areas. With increased data link distances, more flexible regulations, and even better endurance capabilities, I think small fixed-wing drones will finally come into their own and generate indisputable ROI within the next 12-36 months.

In what ways have you seen the terrain totally change or impact the scope and logistics of a project?

When conducting mapping missions in hilly or mountainous areas, terrain changes can alter the overall level of resolution in a data set. Ideally, a given data set has one static resolution value (i.e. 2 centimeters per pixel across the entire result). If the drone maintains a static altitude above sea level when operating over varying terrain and capturing imagery, the distance from the camera to the ground constantly changes. This creates inconsistent data because the ground (the subject) gets closer and further away from the static camera, causing varying changes in resolution. Alternatively, if the drone “hugs” the terrain and follows the contours of the ground at a constant altitude as it flies, the data’s resolution maintains consistency and thereby is much more desirable. This typically all comes down to the software you use. Professional drone pilots will opt for more robust software which allows options for terrain following/hugging or meticulously setting waypoints at the desired heights over the entire area of operations. Hilly terrain is also difficult due to variable wind and weather conditions and dictates where the takeoff/landing points are for maintaining visual line of sight and good quality radio link.

This happens fairly often when people and businesses who are new to drone technology begin to experiment. The case that I see this come up often in is regarding photogrammetric volume calculations and deals with relative vs. absolute accuracy. Keep in mind that precision is independent of accuracy. Imagine you use photogrammetry to create a 3D model and point cloud of a large mound of dirt, about the size of a dump truck. You fly the drone around the pile of dirt, take a bunch of pictures from all angles, then upload those images into photogrammetric processing software and get your results—the 3D model and point cloud. Then, using more software you want to calculate the volume of this pile of dirt since it has been recreated in 3D. Due to the way that photogrammetry software reconstructs the dirt, it actually has excellent proportional reconstruction—meaning that the real-life volume of that dirt pile will be very similar (typically within 1-5%) to the 3D generated version of the pile. That means that there is great relative accuracy compared to the original. What if, from the same set of data, you want to know exactly where that same pile of dirt is located on the planet and get the GPS coordinates, within centimeters. That level of absolute accuracy is difficult to obtain due to common drone on-board GPS systems not being as accurate as other methods like ground control points. Resolution vs. accuracy is also something that comes up fairly often—but let’s save that for a later date.

ROI is a huge issue for operators of all sizes, but I thought it was a great point by Mark to mention that while they might not see a drone make something faster, cheaper or safer in everything it does, they can see those differences across a project. Do you think an issue that some operators run into is thinking or believing they’ll be able to see those sort of increases in efficiency with everything a drone does?

Totally. I say it at least once a week but really there’s a ton of hype around drones. Just by having one doesn’t pay for itself. When you utilize the drone in calculated, specific ways, you can achieve the ROI you’re looking for. Whether it’s intangible by increasing safety and eliminating the need for a human to get into a dangerous situation or tangible where you can literally attribute hours (and thereby dollars) saved by decreasing the amount of time it takes to conduct a wide area survey, the ROI you look for is related to your objective. This can also be why it’s sometimes difficult for a company to give you the exact numbers on what drone technology does for them. Looking at the big picture and comparing a drone to traditional methods is a great way to fully realize all of the benefits that drones provide. But in the end, a drone is not always the best tool for the job. A successful business already identifies with that and the drone becomes another tool in the toolbox for accomplishing the overarching goal—finishing a project within budget or increasing gains otherwise.

We went out flew it one morning for them, took us I think right around an hour to fly it captured all the imagery as well as the Toppo data, they had PLS set the benchmarks on the site about six or seven of them for us. And we you know had great results on that high accuracy quick turnaround of the data and the client was really really happy with with what we were able to provide and in the timeframe that we were able to provide it as well.