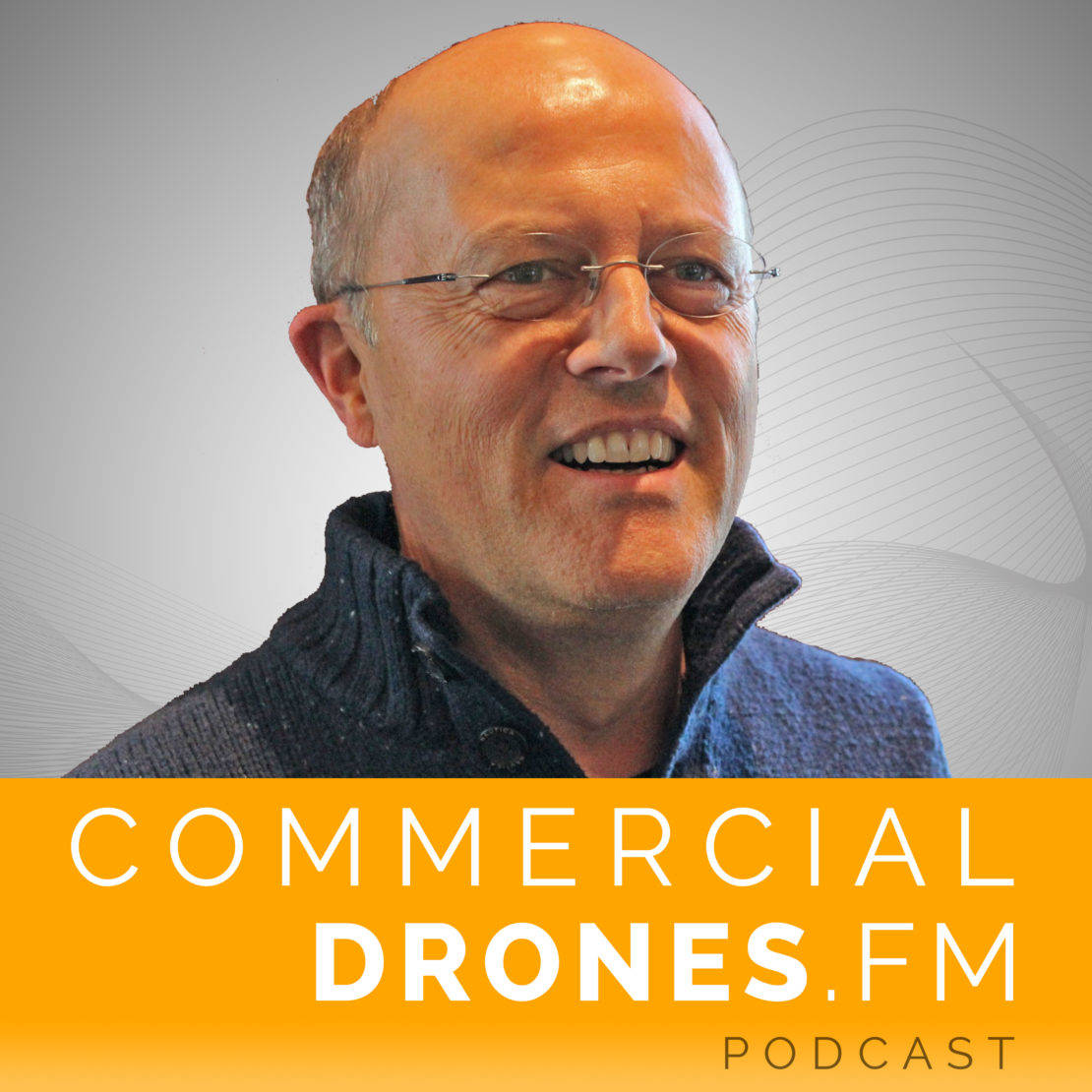 With over 500 million acres of land under their management, the Department of the Interior (DOI) is the largest single landowner in the United States. The DOI maintains this land for U.S. citizens and in order to keep eyes on it, have 1,200+ aircraft in their fleet—drones included. Mark Bathrick, an ex-Navy TOPGUN fighter and test pilot, is the Director of Aviation (OAS) for the DOI and joins Ian to discuss how an organization of 70,000 employees make use of drones and how aviation plays such a critical role in their success. From fighting forest fires and monitoring wildlife, to maintaining the Statue of Liberty and giving us the 4 key competencies that drone companies need to master for success, Mark’s experience provides a wealth of wisdom for anyone who uses drones commercially.

Learn more about Mark Bathrick and his fascinating career by clicking here.

At the 2016 Commercial UAV Expo, Mark Bathrick, Director of Aviation Services at the U.S. Department of the Interior (DOI), delivered a keynote address entitled, “Four Must-Have Competencies for Commercial UAV Success”. The presentation showcased his insights and experiences when it comes to drone adoption, and it’s an especially powerful perspective since that’s coming from a person who has become a recognized leader in the domestic use and integration of UAS for a department that manages over 500 million acres of public land across the United States.

On episode #31 of the Commercial Drones FM podcast, entitled The U.S. Department of the Interior: 500 Million Acres & 1,200 Aircraft (Drones Included) with Mark Bathrick, host Ian Smith sat down with Mark to explore how an organization of 70,000 employees make use of drones and how aviation is a big part of what they’re doing in the present and will be doing in the future. I connected with Ian to capture some further thoughts around those four competencies, how large organizations will soon be able to leverage drone technology and plenty more.

Jeremiah Karpowicz: Hearing Mark talk through how many different tasks and responsibilities the DOI has provides a hint of the scope of that department. Lots of people in the drone industry mention how many different opportunities will arise for users once the technology becomes more ubiquitous, but huge organizations with various duties like the DOI will be in an especially powerful position to really explore and leverage those sorts of new opportunities, don’t you think?

Ian Smith: First off, I was really shocked to learn much of the knowledge bombs that Mark dropped on that episode. The DOI being the largest landowner in the U.S. is absolutely going to be a huge challenge for them, but also a potential boon in pushing forward new opportunities with drones. The amount of work they have ahead for them is tremendous, of course—but an organization of tens of thousands of employees, with 50% being involved in aviation already definitely has a great shot to get the job done correctly.

Out of the four must-have competencies to achieve commercial UAV success (aviation, privacy, security and culture) that Mark mentioned, which have you seen people struggle most with?

Oh, this is a great question. It’s hard to pick just one. I have to go with “aviation” first and “culture” being a close second. I could debate this all day but to me, drones are inherently aviation. I’m not going to define what aviation means but the fact they they literally fly and operate within the NAS (National Airspace System) that the FAA has complete authority over, places them firmly in the aviation realm. Once you pilot a drone, you become an aviator. Furthermore, a Part 107 certificate from the FAA is literally a pilot certificate so you can legitimately call yourself a pilot when you get one of those. How many childhood dreams is that going to help make come true?

“Culture” has to come after “aviation” because you must embody some of the core, cultural tenants of aviation in order to have commercial drone success. You’ve got to practice it, preach it, and live it. Culture has a lot to do with safety and cognizance. An organization who begins to adopt drones into their business must fully realize the risks they are taking when operating aircraft. Mark is absolutely dead-on with these competencies.

I thought it was great to hear Mark say his department isn’t looking at drones to replace their manned air missions, but instead to use the technology in situations where manned solutions were ill-suited or too expensive. When it comes down to it, how many professionals do you think are trying to use drones to wholly replace what they had been doing with a plane or helicopter?

This question seems to come up from time to time, in various forms. I think if we start with the organizations who are completely new to aviation, they are trying to essentially create a flight department from scratch. That’s pretty tough to do and it really pigeonholes you into very specific ways of operating. In these cases, they’re not really replacing places or helicopters—they’re actually trying to make (or believe that) a small drone do everything. This is not ideal. However, when approached thoughtfully, it makes a ton of sense when taking regulations and hardware capabilities into account.

For those organizations who already have flight departments or have been operating manned aircraft, I think the approach is quite different. The “culture” of aviation has already permeated the group and this usually leads to a much more compartmentalized approach, treating drones very much like their manned counterparts.

In either of these scenarios, there’s no right or wrong answer. It’s intriguing to see both approaches and to see each one succeed, but also fail. It all comes down to determining what the best tool for the job is.

The “If You Fly, We Can’t” campaign is something we’ve covered, and it’s rather amazing to think about the risk operators create for safety professionals when they take a drone into the air near something like a wildfire. Do you think it’s significant that this campaign came out of the Forest Service rather than the FAA or someone from an organization within the drone industry?

It seems like every question comes back to one of Mark’s four competencies.

A successful drone company will embody a self-aware culture, that embraces aviation and security. Those organizations—and pretty much any organization that’s not completely clueless—will have no trouble with this. I think that since the U.S. Forest Service created this campaign means that it was a huge problem. It really needs no justification.

I think it would have been incredible if it would’ve come out of an organization already in the drone industry. Most of these incidents are likely occurring with individuals who likely just haven’t gotten the memo behind the sticks—hobbyists and recreational flyers. Unfortunately, nobody knows the U.S. Forest Service like the U.S. Forest Service does. I completely support “If You Fly, We Can’t”.

The fact that the DOI plans to use qualified drone service providers is great ews, but as Mark mentioned, that means organizations like his will expect those services providers to be using the latest and greatest technology. Will that force service providers into an “arms race” to make sure they have the newest tech and tools? Or will that be an irrelevant issue as service providers build trust with clients and create trustworthy reputations?

This is hard to predict but I think that the trust and reputation will almost always beat out the latest and greatest technology. One thing to be clear on—at least with government agencies like the DOI—is that there is a type of tender process that they release to the public once they need hardware/software/services. Organizations have to apply and complete RFPs in order to even be considered. This means that usually, most of the technological (hardware and software) requirements are well-defined and clearly stated. A wise, professional drone operator will already have (or be able to acquire) the best tools for the job.

I think the arms race has already begun and will continue to exacerbate in regards to small, battery-powered drones. As regulations progress and heavier, more powerful machines are legally allowed to be operated commercially, we may see reputation playing more of a role. (Think turbine or piston-engine, 200-pound behemoths with large cargo capacity and mega endurance.)