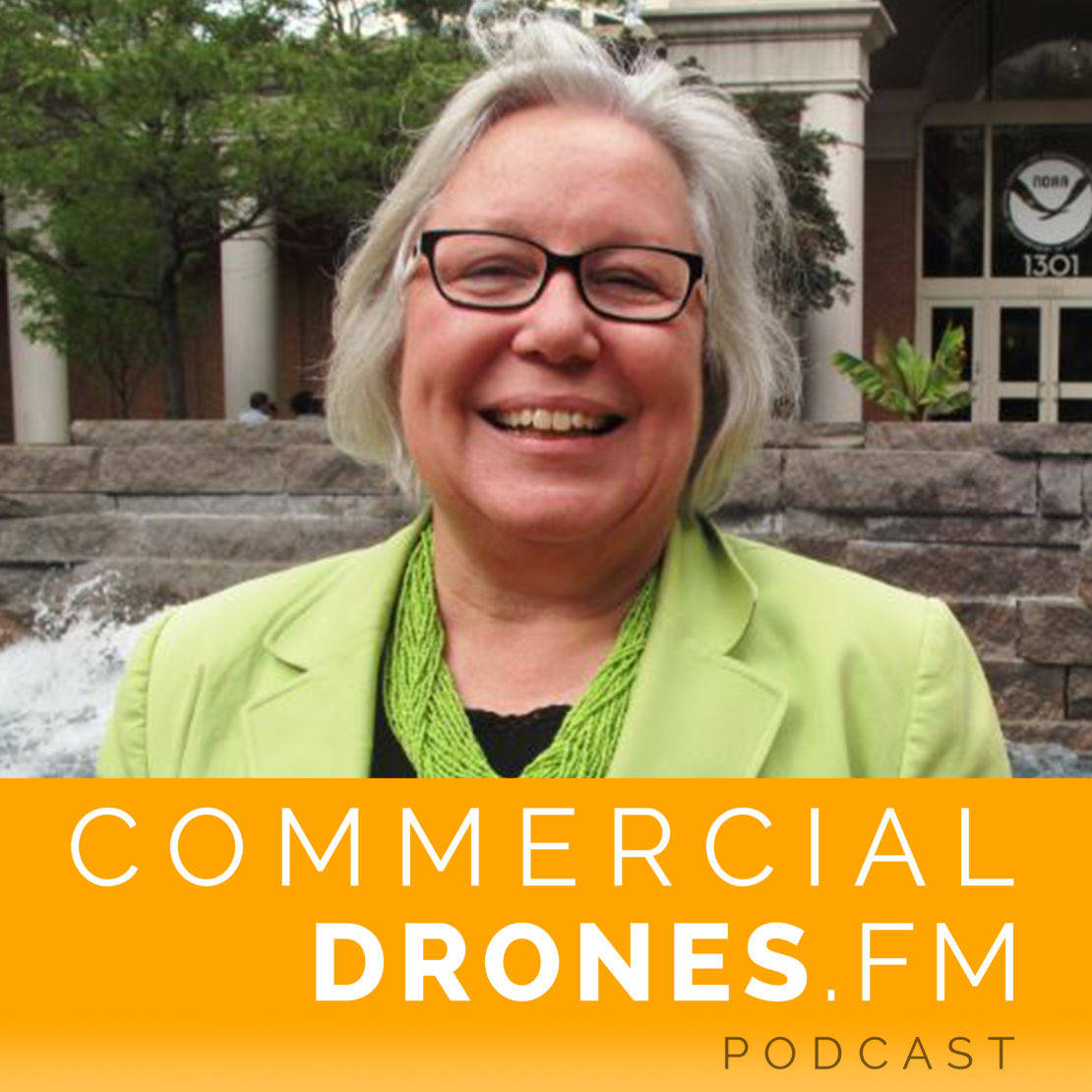 The United States’ NOAA (National Oceanic and Atmospheric Administration) has many responsibilities but they can essentially be thought of as the federal government’s “Environmental Intelligence Agency”. Robbie Hood, a meteorologist by trade, is the Director of the Unmanned Aircraft Systems (UAS) Program at NOAA. Ian and Robbie discuss the challenges and complexities of how NOAA uses drones for mapping of coastal erosion, studying sea level changes, populations of fisheries and marine mammals, and monitoring weather conditions across their territory of the entire United States—with a budget of $5 million per year.

Robbie Hood is the Director of the Unmanned Aircraft Systems (UAS) Program at NOAA, and she detailed the sort of work she does in this capacity during her keynote address at the 2016 Commercial UAV Expo. During her “Impact of UAVs on Investment in Data Management” presentation, Robbie explained the critical ways in which drones have impacted the sort of data NOAA scientists can gather as well as how the organization handles the processing, analyzing and storing all of that info.

Commercial Drones FM podcast host Ian Smith was able to connect with Robbie for episode #28 of his show at the event, How NOAA Spends A $5 Million Drone Budget with Robbie Hood, where he explored the insights Robbie had to share with attendees even further. They discussed the specific ways NOAA is using drones as well as how that usage impacts the NOAA budget. Ian shared some additional thoughts around a few of the topics Robbie mentioned during the episode, including the usefulness of info gathered from an RGB camera, how data can be the ultimate equalizer and plenty more in this article.

Jeremiah Karpowicz: One of the really interesting things Robbie mentioned was that a big part of her job is to use drones to help gather info in order to better understand what’s happened in the environment and then present that info to the public. Do you think it will be important for NOAA to reveal or even highlight when and how certain pieces of info are gathered by a drone? Could that effort be an important part of helping shift some negative public perceptions of drones?

Ian Smith: That’s an interesting thought. I think that since NOAA is a federal agency and in the interest of full transparency, it would be great for them to highlight specific cases where drones were used effectively. In fact, they may already be doing that. I don’t believe that they’d reveal their drone usage as a specific method to shift negative public perceptions of drones, however. Then again, these days I am firmly in the camp that the public really doesn’t view drones negatively anymore. I think the shock of hovering drones has worn off a bit and is more of an annoyance to some at this point, rather than a complete negative perception.

I know the question of whether or not an enterprise can/should build their own in-house drone program or utilize service providers is a topic you’re especially interested in, but it’s also applicable to organizations like NOAA, which you discussed with Robbie. It’s probably not a case of either/or for the industry as a whole, but it’s not even either/or for large organizations like NOAA, is it?

It’s definitely not. The reason I am so interested in this question is because most commercial drone entrepreneurs that I’ve spoken with have been fairly obsessed with this themselves. They want to know if as technology progresses, is there any job security. As advancements in software come about, it gets easier and easier to conduct high precision commercial drone operations, and these drone service providers wonder if they will still be needed or if large organizations will take the burden on themselves. Over the course of my interviews with keynote speakers at the Commercial UAV Expo, I have learned—emphatically—that the goal of the enterprise is not to do everything themselves. Their businesses literally cannot support that and most have developed large ecosystems of contractors who handle other very important aspects of their day-to-day businesses. It is no different with drones. Of course, a professional drone operator needs to provide more services than just flying the drone—they need to provide guidance, reporting, analysis, and more. But while software is making it ridiculously easy to make a drone fly a mission, it’s also making it easy to generate reports and analysis as well—see the DroneDeploy App Market as one example, which takes drone data to the next level by giving access to apps which can do amazing things with computer vision and machine learning.

With all the talk about current and upcoming sensor capabilities, were you surprised to find out that NOAA still gets plenty of useful and relevant info from a plain old RGB camera?

Not at all. RGB sensors can provide incredible value with the data they produce. Even though RGB data looks exactly what our own eyes see and it’s not as fancy or seemingly complex as something like multispectral data, RGB can be leveraged in non-conventional ways. For vegetation indices and agriculture, you can still glean unique insight from RGB data after applying specific algorithmic processing methods to it. Using computer vision you can count objects or automatically detect anomalies. But best of all, RGB data from drones really shines in the most simple of ways that our human brains quickly understand—as a high resolution, aerial view of an area that can be gathered and seen almost instantaneously. Although, I do believe that to really ratchet things up a few notches, combining that RGB data with data from other spectral bands (near infrared, red edge, infrared, etc.) is where things begin to get more interesting—by orders of magnitude.

Another topic that you’ve explored with your guests surrounds the need for complete drone solutions, and how many users don’t want a pile of data, but instead want an answer. Robbie talked about how that sort of system would be utilized and appreciated within NOAA, but also mentioned there are scientists and analysts who would want all of that raw data. That speaks to how many different wants, desires and needs surround this piece of the workflow in just about every environment, doesn’t it?

Indeed. More traditional enterprise organizations want answers. They want to be told what to do, how to do it, and why doing it is going to fix their problems. These are the agricultural co-ops, construction, mining, insurance, and utility companies. An organization like NOAA—and many other environmental and research outfits—absolutely have a need for all of that raw data. Whether it’s purely for conjecture or for their own analysis, it helps to have the full picture so that they can draw their own conclusions. That is not to say that the traditional enterprise do not want the raw data—on the contrary, they do—but rather, they want to purchase or implement solutions to known problems. A drone and a map is not a solution, but a map and a plan with a report which says exactly what to do, is.

Robbie talked about data as an equalizer in terms of helping build a more diverse workforce. Do you think that will be the ultimate driver as we seek to make sure everyone who wants to get involved with this industry and technology has the opportunity to do so?

That was one of my favorite things anyone has said on the podcast so far. I absolutely believe it to be true and it was so elegantly put that it is undeniable. As drones become increasingly autonomous, the next hurdle is data—examination, analysis, and action. A well-trained human brain does not differ from gender to gender and brain power is what’s needed to manage and make use of this massive amount of data that drones are producing. Robbie’s career is inspirational for anyone who is interested in getting into STEM and the fact that a trained brain is what you need to succeed, anyone can make a career in these fields an entirely attainable goal.